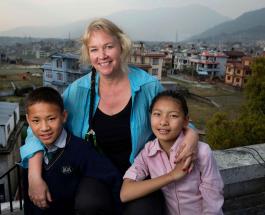 In New York, London, Bermuda and Sydney, she's the owner and head of Isis AP, which advises companies on mergers and raises money for fund managers, but Exel is better known as the caftan-wearing founder and chief fundraiser of the Isis Foundation, which provides life-saving health care and education for 20,000 people a year in two of the world's most impoverished nations, Nepal and Uganda.

Exel founded the charity in 1998 (when her company was in its infancy) because she didn't want to wait until she had amassed a fortune to begin her philanthropy. "It's the purpose of the business," she says. "There's one mission."

In fact, Exel turns over all of the Sydney-based company's profit to her foundation, which spends it on projects ranging from a neonatal intensive care ward in Kiwoko, Uganda, to a refuge for 136 Nepalese children who had faced being sold for prostitution and child labor.

As a person who raises millions, Exel's personal balance sheet is modest. Some years, she pays herself a small salary; in others, she lives on savings and director fees. When traveling on foundation business, it's always in economy class.

While her finance business has given $5.75 million to the Isis Foundation, Exel only last year put down a deposit on her first home--a two-bedroom townhouse near Isis's headquarters in the traditionally working class Sydney neighborhood of Rozelle.

Exel says her social activism stems partly from her upbringing. Her father was a foreign correspondent who covered the Vietnam War for the New Zealand Press Association before becoming a campaigner for New Zealand's Labour Party.

Exel's biggest challenge - like many who have donated to and /or helped build a organization - is seeking to make Isis less dependent on its founder.